Sixteen months ago, I left my corporate job. I made The Escape. It was time. Mostly, I’ve rested. I’ve allowed myself not to worry so much. I’ve avoided deadlines like the plague. This has been a precious gift of time. I’ve been able to spend more time with family and friends. And like my friend [...]

In the past year, I purchased a long-arm quilting machine. A quilt is usually comprised of 3 layers: the pieced top, the middle cotton or wool batting and the fabric backing. This machine will sew the three layers of a quilt together. I am enjoying learning to operate this machine. Here is a photo of [...]

If we were sunflowers, would we see ourselves as glorious and radiant? Or would we be a sad drooping mess? Self-perception is a tricky business. Twenty years ago, psychologists David Dunning and Justin Kruger were studying how people estimate their own levels of competence. They concluded that incompetent people tend not to recognize their own [...]

I visited one of my favorite Lake Michigan beaches, Esch Road Beach, in mid July. I like to walk along this beach in the early morning before the throngs of people arrive. To the north of the bay one can see the Empire Bluffs rising 200 feet from the waves below. To the south, Point [...]

Summer Solstice 2019 is now history. That evening at sunset ( the very late sunset) I was sitting by the shore of Glen Lake gazing at the fabulous sunset appearing in the sky over the Sleeping Bear Sand Dunes. The glow of the sky. The reflection in the water. The fresh stillness of the air. [...]

What a delight to be strolling through the National Arboretum in Washington, DC when the cherry trees were in blossom during the first part of April. The snow had melted and the sun was shining. In addition to flowering cherry trees, there were other features to enjoy. In mid-April the herb garden was still fairly [...]

On most days, the Ohio River does not flow through the streets of downtown Marietta, Ohio. However, this city does have a history of flooding in extreme weather situations. The last major flood was in 2004 when the Ohio Valley was hit by the heavy rains of Hurricane Ivan. There are several markers on downtown [...]

Winters can be long. Sometimes really long. There’s comes a time when most Northerners are just done with the shortage of daylight and the inconvenience of wintery weather. Those who can, head out for warmer and sunnier climates. Others huddle by sun lamps. Most get more grumpy. More often than not, the top two photos [...]

Woodstock, Illinois is a picturesque town some 60 miles northwest of Chicago. It is best known as the location for the film “Groundhog Day”. I enjoy visiting this lovely town. Recently, the McHenry County Historical Society hosted a heritage quilt show at the local Opera House. The quilts shown were between 80 and 150 years [...]

I am now the proud owner of a long arm quilting machine. For you non-quilters, this is an automated quilting frame where the quilt top, the cotton batting (in between stuffing) and the quilt back are sewn together. In our grandmothers’ time, this would be stretched on a large wooden frame and several ladies would [...] 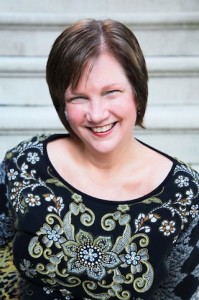 Looking for previous editions of JOYmail?  You'll find them here.